Women and transformation in plumbing

Justiene Mahlafunya started working for the PIRB in 2018 and has steadily risen through the ranks since. She started as a receptionist and within a year was in the Complaints Department, as the consumer-facing Complaints Administrator.

“I’m also a wife and mother of two – and a law student. I’m very passionate about law and propose one day to specialise in family law. When a vacancy became available on the Transformation Committee, I decided to apply. As an individual citizen of South Africa and representative of the PIRB, I find it is important that the plumbing industry continuously facilitates development that links to matters of diversity and transformation,” says Mahlafunya.

“I believe this is particularly important because plumbing is one of the industries which is currently least representative, being extremely male-dominated. I feel that sometimes females are overlooked in the industry. My goal for being on the committee is to shed light on the importance of having females on the committee, while also taking active steps towards ensuring that individuals in the plumbing industry are enabled and supported in order for everyone to be represented equally,” she added.

“I believe that I can help identify gaps in the industry and work towards an inclusive industry for all. This is not just about women in plumbing – which is already addressed by an independent organisation called Women in Plumbing headed by Kaela Wilson and Lorraine Mooi – but ensuring that the PIRB comes to represent groups of people and individuals from different ethnic groups, races, socioeconomic status, gender status, languages, religions and geographical areas. It isn’t necessarily the case that all groups are not equally represented at PIRB, but Justiene feels she would like to contribute to “shedding more light on it” says Mahlafunya. 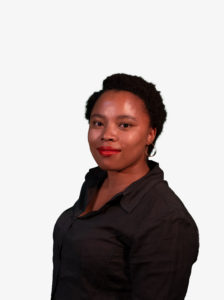 She emphasises that this applies as much to all people in the plumbing industry – from administrators to people in manufacturing, as to the plumbers themselves. To do this requires a national voice, because people of various ethnic groups not yet part of the plumbing professionals have to be reached as future members of the industry. There is, after all, a considerable shortage of qualified plumbers.

“It’s about first having everyone understand the importance of the industry – that it is the guardian of the single most important commodity on Earth, water – but also to have the members of the industry understand their own importance within the industry, regardless of their background. The typical consumer automatically thinks of anyone involved in plumbing as someone who unblocks drains. This shows the level of changing perceptions that needs to occur: plumbers do unblock drains, but a great deal more too.”

She notes one of the oddities of the demographics in plumbers, which is that among the male contingent (over 97%) is that white men are more than other races; but among female plumbers (over 2%) the black contingent predominates. “Transformation is an ongoing process of uplifting all people who classify themselves as plumbers irrespective of their demographic profile. It is also a process that takes cognisance that there are certain people who were not able to access the necessary resources to bring them into the fold – until now.”

Mahlafunya joins the committee at an exciting time when numerous initiatives are gaining momentum. Transformation takes many forms in the plumbing industry. The initiative likely to make the greatest impact – and currently receiving the lion’s share of energy – is the PIRB’s Recognition of Prior Learning (RPL) first introduced in 2020. Even before RPL, the Black segment of PIRB membership has shown threefold growth over the past few years – which is measured solely against qualifications. The RPL aims to considerably increase those plumbers eligible to join PIRB.

GIZ research has shown there are more than 120 000 self-identified plumbers in the informal sector who face challenges, requiring some easing of the barriers to entering the professional industry. The objective of RPL is consequently to drop the barriers to entry without dropping the quality of the process. SAQA policy mandates professional bodies to have RPL routes to award professional designations.

There are a large number of development programs at PIRB/IOPSA but a key component of this strategy, which has until this year been missing is a mentorship program. Thanks to PIRB, the Master Plumber Recognition Program was introduced this year to fill that gap. Trainees and unqualified plumbers alike can now get a helping hand. There are now 23 mentors fully trained over the past three months. It will in turn underpin all other skills development initiatives.