Selling the plumbing trade to a young generation focused on college 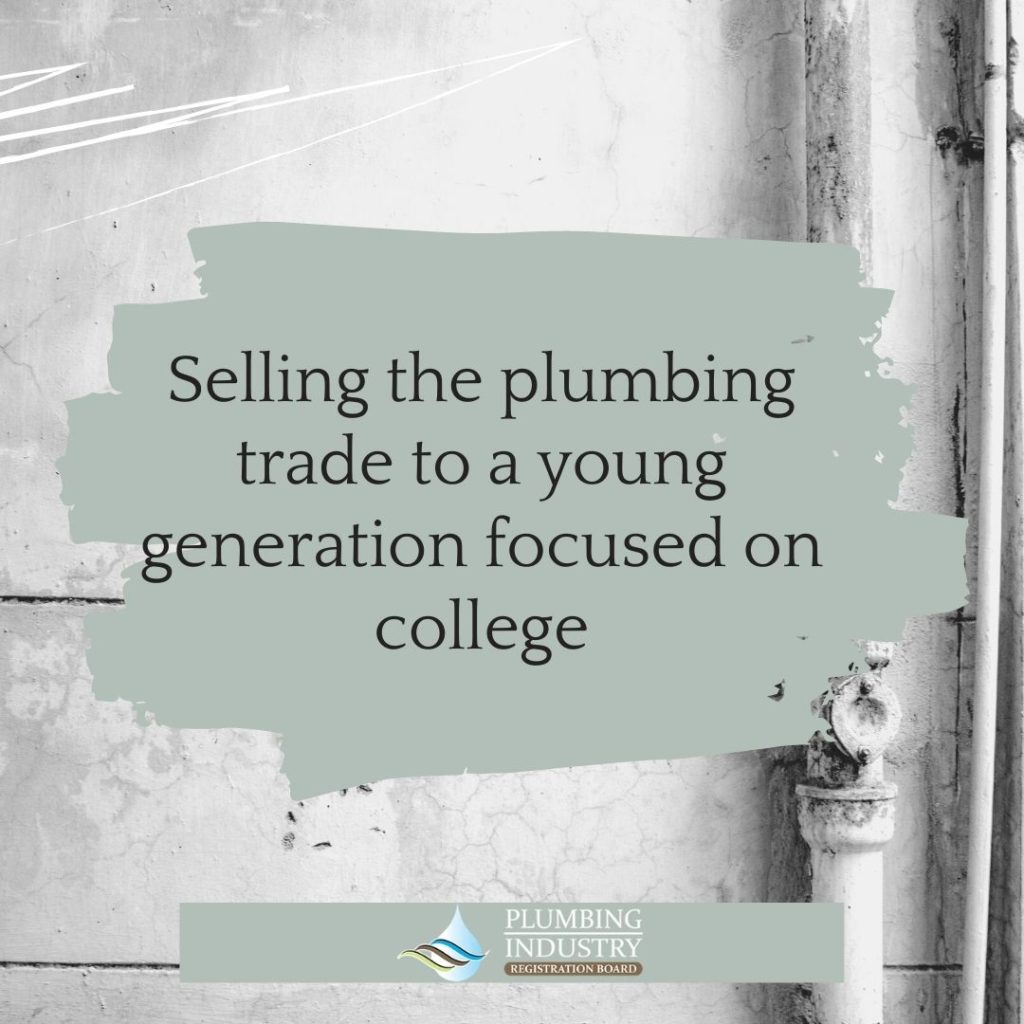 As the industry continues to lose the older members of its workforce, and the skills gap widens, it’s imperative for companies to be proactive about their recruitment efforts, writes Anthony Pacilla for Plumber Magazine.

One of the most overwhelming tasks today in the plumbing industry can be human resources management. Or, to more simply state it — finding, hiring and retaining employees.

The skilled workforce we require is not available, and we are forced to concern ourselves with changes in the makeup and expectations of the modern employee.

The days of plenty of qualified applicants lining up, hoping to get a job with your plumbing outfit are gone. The older generation of craftsmen is retiring and gradually dying out. The new generation is hungry to find an exciting career, but these workers are a completely different animal than the older generation of “company men” who were loyal to the bone. Many members of this demographic are off to college. And even for those within this demographic who don’t attend college, there is still oftentimes the expectation of a job that doesn’t require manual labor like their father and grandfather may have had to do.

Attaining the highest level of education has become a litmus test for success. The problem is that a four-year liberal arts education is now the norm and considered base level education to the younger population. High school students are automatically herded into a four-year degree. The degree itself does not matter.

A student is rushed into a four-year degree in order to spend enough time and money within that program/institution to figure out what they want to do with their lives. Once they figure that out (which can sometimes take a few years itself), they then may head into a field that adds to their four-year degree with a graduate program. Their student debt has now accumulated to an insane amount, and they feel the pressure of the payments coming once they graduate. So they try to get even more education for the possibility of getting an even higher paying job in order to be able to afford their now insurmountable student debt.

Why is a young high school student willing to go through all that turmoil to get a college degree? Social status. Colleges have done a great job marketing themselves as the only “sure thing” for becoming wealthy and successful.

Remember, colleges used to be only for the elite. They were known to offer degrees for becoming doctors, lawyers, politicians, bankers and entrepreneurs. They didn’t have the offerings that they do today. They were not even in the business of training for many typical jobs today, such as teachers and nurses. Colleges looked at the large population of students and thought, “Why don’t we cast a wider net and open the floodgates? Let’s offer programs, any programs, for everything under the sun and charge top dollar to these students who will love the prestige of being at the same college that was once known only for the elite.”

So how can a trade like plumbing compete with the college machine? We have to borrow some of their ideas and bring to light some of their shortcomings.

Begin by getting involved locally with high schools, vocational schools, and trade schools. You need to take that aspect more seriously if you want to recruit employees. Run advertisements on social media promoting how you can have a great career with zero college debt. Consider being provocative with your advertising and call out shortcomings of the college system in order to grab attention:

Let’s start playing a little dirty and make some waves online to get everyone’s attention.

Create a clear path to success from a new employee’s first day to how and when they get raises and training. The younger generation loves accomplishments, certification cards, and knowing what they are headed for. With recruiting ads, emphasize prestige, tradition, a pathway to success, and zero college debt.

You have to hit the college debt aspect hard. These high school students are shopping for the next step in their life, and until we make adjustments to how we sell ourselves, they are never going to buy it. As the knowledge gap gets wider, and more of your employees retire or die, the situation will only get more desperate. Get a plan of action and take some steps now before it’s too late.