Are you treating customers right? Do they think so? 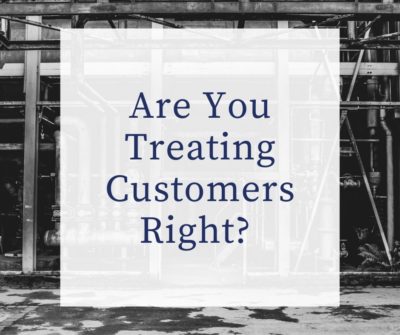 Are you treating customers right? Do they think so?

“Perception is reality for customers, and clear communication will reinforce that you respect them and appreciate their business,” writes Rodney Koop for Plumber Magazine.

It’s not often that you get a chance to rip off a customer a second time.

“I suppose that’s because most people don’t call you again when they feel they were taken advantage of,” says Koop. “So, is it a myth that people feel the service person is just there to rip them off? Have they been ripped off before? Or is it simply a figment of their imagination?”

A customer once told Koop that he would be watching him very closely so that he couldn’t steal anything.

“He also said he was concerned we might sabotage something just to get more work. He never even noticed when I ran the screwdriver down the side of his Porsche, but I’m betting he did later.

Koop says he remembers when he regretted doing the work after the service call just started out wrong.

So, he decided to stop the call and clear the air.

He told Koop to go ahead, and he asked him this question:

“Mr. Customer, did Jim or I or someone at our company treat you wrong sometime in the past? Is there some way that one of us offended you or in some way took advantage of you?”

He continued, “Well you said that you would be watching to see if we might steal something, so I wondered what one of us might have done to make you feel that way.”

“Oh, no,” he said, “it wasn’t anyone from your company! It was that guy who delivered my new refrigerator. When he left, I noticed my favorite coffee cup was missing, so I decided that from now on I would watch closely when anyone new comes into my house. I hope you didn’t think I meant that I didn’t trust you or don’t want you to actually work in my home. I am so sorry if I made you feel that way!”

Right then his eyes teared up just a little as he was feeling really bad about that thing with the screwdriver.

“Well,” I said, “Jim and I are here to help with your heating system. How about you tell us what’s happening?

“From then on, the call went well. It turned out Mr. Customer was just a little bit concerned because he knew he had very little knowledge about heating systems, and he thought he might need to understand all about how his furnace worked so he would know what to have us do. We quickly put his mind at ease by telling him we didn’t want his family to be cold tonight, so we’d take a close look at what his furnace was doing and find out why it didn’t want to heat the home.”

“And when we informed him that his furnace wasn’t coming on because the ignition system had a problem, he quickly chose one of our options that included replacing the parts that were causing the problem, plus a complete service and inspection of all the system’s components.

“I tell this little story to remind myself that many times in the past I thought I had to go in and teach customers how their equipment worked by using technical terms, pictures and diagrams and taking a lot of time. But most customers are like us when we need something: We didn’t come for an education — we came to have a problem solved by someone who we felt we could trust.”

“If I, the contractor, assume the customer is going to want a lot of detail about what I need to do to solve their problem, I am wrong 90% of the time. They usually just want it done.

“If the customer assumes I will think they are dumb because they don’t understand what needs to be fixed, they are wrong 90% of the time. I don’t expect them to be the expert that I am.

“If a spouse is asking for details, often they just want to be able to answer the questions they know their husband or wife will be asking when he or she gets home. They don’t want or need a lot of detail, just what had to be done and if it’s fixed.

“If I, the contractor, am afraid they will think I am overpriced, get out the screwdriver. Hold the phone, just kidding on that one, too. But I will say that the solution to this concern is to explain your work as an entire system, not just a part. “Mr. Customer, for the entire system to work from beginning to end, we need to make sure we completely solve your problem and also run the entire system before we leave to ensure it’s right the first time.”

It’s really about making friends and wanting them to be happy when you leave.

“About the screwdriver thing with the Porsche, I’m sure you took that with a grain of salt, didn’t you?”